A multi-use events center scheduled to open on the campus of California Baptist University in 2017 will become the school’s largest indoor gathering space to serve a variety of campus activities, CBU officials announced Monday.

“An events center has been a dream at California Baptist University for many years, so it is incredibly exciting to see this vision becoming a reality,” said Dr. Ronald L. Ellis, CBU president. “It will be a wonderful addition to the campus and a source of great pride for many of the students currently enrolled at CBU as well as countless more who will follow for generations to come.”

Infrastructure construction is underway on the $73 million project that is being funded through gifts and financing. The events center is being built adjacent to the CBU Recreation Center located in Lancer Plaza near the corner of Adams Street and Diana Avenue. The center’s north-facing front entrance will be located on Lancer Lane. The centerpiece of the 153,000 square feet building will be a 5,200 seat arena—expandable to more than 6,000 seats—that will showcase some of the CBU athletics teams competing in the PacWest Conference and NCAA Division II. These include men’s and women’s basketball, wrestling, and men’s and women’s volleyball. The building also will feature locker rooms for home and visiting teams as well as new athletics offices. The two-level events center is designed to complement the Mission Revival architecture style that is a hallmark of the California Baptist University campus. A 100-foot tower will adorn the building’s north side.

“This center will be much more than just an arena for Lancers athletics,” Ellis said. “It will serve all of the CBU community through robust programming that supports the university’s academic mission as well as extracurricular activities.”

Besides athletics, the arena also will provide much needed space for CBU’s chapel program attended by nearly 5,000 students weekly during the academic year. Other uses planned for the events center include student orientation activities and commencement ceremonies that are held each spring and fall.

The CBU events center is scheduled for completion in April 2017, in time for spring commencement activities in early May.

Moving Up in Division II

In just two years as a fully-fledged NCAA Division II member, California Baptist University has established itself as one of the top athletic programs in the division. The Lancers finished the 2014-15 season with a 16th-place finish in the Division II Learfield Sports Directors’ Cup standings, moving up 10 spots from last year’s placement.

“Our student athletes and coaches had a great year,” said Director of Athletics Dr. Micah Parker. “It’s exciting to be ranked so high in only our second year in the NCAA Division II.”

CBU, which claimed its third PacWest Commissioner’s Cup earlier this spring, finishes as the highest program not only among the PacWest institutions, but the West Region as well with 523.70 points. The Lancers completed a 10-spot jump from its 26th-place finish in the Directors’ Cup standing from 2013-14. Azusa Pacific comes in at No. 17 (522.75) in its first year eligible, while Simon Fraser is the next West Region program, sitting at No. 26 (467.00).

The Learfield Sports Directors’ Cup was developed as a joint effort between the National Association of Collegiate Directors of Athletics (NACDA) and USA Today. Points are awarded based on each institution’s finish in up to 14 sports — seven women’s and seven men’s. 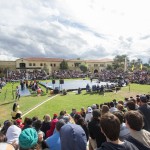 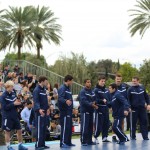 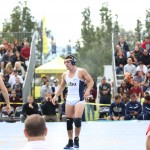 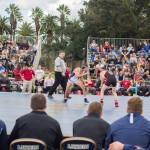 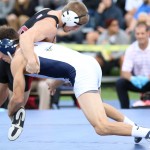 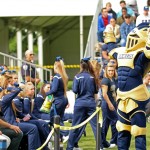 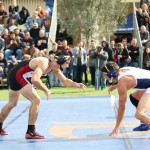 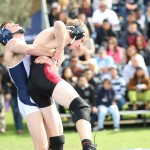 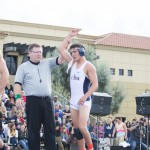 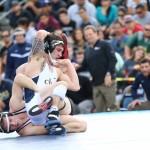 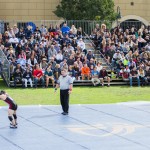 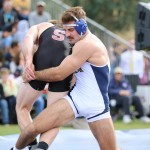 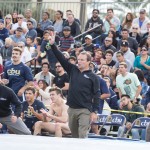 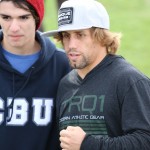 California Baptist University students have been known to excel in their selective fields outside of college, and the same goes for the school’s student-athletes. It was perhaps most evident this summer, as four Lancers in different sports have experienced success outside of the collegiate ranks.

Spotlights were shown on the Lancers’ baseball, women’s soccer, men’s volleyball and men’s water polo programs this summer, with all three seeing one of their athletes break into new waters in their professional or international careers. Baseball’s Adam Hofacket signed a minor-league contract with the Los Angeles Angels of Anaheim, Kristopher Johnson of men’s volleyball made the United States team for the Pan American Games and men’s water polo’s Eric Carnohan inked a professional contract with Water Polo Navarra of Pamplona, Spain. Kelly Jenks from women’s soccer stepped in and made an immediate impact with Kokkola F10, a professional team in Finland. Hofacket became the 26th Lancer drafted under Coach Gary Adcock’s 12-year tenure and is one of four players currently in the minor leagues – joined by Caleb Dirks, Trevor Oaks and Sharif Othman. Dirks and Othman are both playing at the double-A level. In 24 games, Hofacket has maintained a 3.41 earned-run average, logged eight saves and struck out 22 batters, compared to just three walks. Jenks adjusted to the next level quickly for Kokkola F10. She played in each of the team’s first 10 games and was leading the league in goals early on, with 12 on the year. Her highlight performance of the young season came in a 4-0 win over Vantaa VJS on June 27th. She scored in the first minute of action and then assisted on another goal in the 91st minute. Johnson was only one of two non-NCAA Division I products selected to the U.S. team but started every set of the tournament held in Toronto, Canada, which was also broadcast through WatchESPN. He finished the tournament with 27 kills on a .529 hitting percentage, eight blocks and four digs in five matches. Johnson has also been named to the U.S. preliminary roster for the 2015 FIVB World Cup and will continue his professional career with Leka Volley Club in Finland this year. Carnohan was signed by Navarra, along with two international players from Brazil and Canada. He left for Spain on Aug. 24th and will look to build on a fantastic senior season he completed with the Lancers in 2014. He joins a list of elite Lancers who have played water polo on the international stage. Austen Ramer, CBU’s career leader in saves with 1,129, played professionally for three years in Australia after graduating in 2012. Brandon Jung also saw plenty of playing time in the Olympics for Canada in 2008.

Looking For a Fast Start

Over the last two seasons, more than 63 percent of California Baptist University’s eligible athletic programs have qualified for the NCAA Division II postseason. The Lancers will look to their six fall programs to set the pace for more success on the conference and national levels in 2015-16. Four fall sports advanced to the NCAA playoffs in their first shot in 2013-14, and the Lancers will look to improve on that feat two years later.

Both men’s and women cross country have qualified for the Division II postseason the last two years, with both programs sweeping the PacWest Championships last year. CBU will open 2015-16 at home with the Lancer Invitational at the Riverside City Cross Country Course at 5 p.m. on Friday. It will be one of three rare home opportunities to see CBU in Riverside this season, with the CBU Invitational (Oct. 3rd) and PacWest Championships (Oct. 24th) taking place at the Riverside City Cross Country Course, as well. The men are looking to win their fifth-straight PacWest title and advance out of the West Region tournament for the third season in a row. The women aim at a repeat performance in the PacWest and to reach the Division II Championships for the first time. In the gym, women’s volleyball was picked to win the PacWest in the conference’s preseason poll after a 16-12, 12-8 in conference run in 2014. The Lancers return all but two regular contributors from last season, including three All-PacWest players and the reigning PacWest, West Region and Division II Freshman of the Year determined by the American Volleyball Coaches Association.

For the second year in a row, CBU will open up at Cal State East Bay’s Route 92 Tournament, followed by a trip to Seattle Pacific for the GNAC-PacWest Crossover. The Lancers open up the conference and home season simultaneously when it hosts Dixie State at 7 p.m. on Sept. 18th. Women’s soccer opens the year in Bellingham, Wash. with games against Western Washington and Concordia (Ore.) on Thursday and Saturday, respectively. The Lancers will open at home against Sonoma State on Sept. 10th at 3 p.m. The team is looking to build on its 11-4-3 record from 2014 when it took second in the PacWest with a 9-0-3 record and just missed out on the postseason.

After winning its final three contests last year, men’s soccer is determined to carry that momentum over into 2015. CBU is looking to charge back into the playoffs, like it did in 2013, after going 18-15-2 and 16-8 in the PacWest combined over the last two years. Much like the women, the Lancer men will open the season in Washington against Seattle Pacific and Simon Fraser in Seattle on Thursday and Saturday, respectively. Cal State Dominguez Hills comes to the Lancer Soccer Field at 4:30 p.m. on Tuesday to kick off the home schedule for CBU. Men’s water polo is gearing up for a new season with a new coach, Kevin Rosa. The Lancers are coming off a program-best, fourth-place finish in the Western Water Polo Association last year and return many of the players who were key to that success. The team is receiving votes in the Collegiate Water Polo Association’s preseason NCAA top-20 poll and opens the year against No. 2 USC and No. 3 Cal in the Triton Invitational on Saturday at 11:10 a.m. and 3:10 p.m., respectively. CBU will open up at home against UC Irvine on Sept. 16th.