A new athletics season means a host of exciting new events coming to California Baptist University. Each year, Lancer fans are offered a unique game-day experience and this year is no different.

CBU starts the year off with a bang, as it hosts half of the inaugural GNAC-PacWest Volleyball Crossover Tournament, along with Dominican, Sept. 11th through the 13th. Outside of potentially hosting a postseason tournament, it stands to be the largest event of the year for the Lancers.

California Baptist University will also host its second outdoor wrestling meet of the season, as well. After sweeping all three matches of their tri-dual outdoor tournament in 2013-14, the Lancers will take it outside when they host Stanford on Saturday, Nov. 1 at 1 p.m. CBU’s grapplers arguably put together their finest season last year. The Lancers had three Rocky Mountain Athletic Conference and Division II Super West Region champions, five NCAA Division II Championship qualifiers and three All-Americans. As a team, CBU finished runner-up in its conference and the region and defeated two Division I institutions. CBU will have another opportunity to make a statement to the wrestling world on Nov. 1 against the Stanford Cardinal. The GNAC-PacWest Crossover can serve as a make-or-break three days for the eight teams in attendance at CBU (Alaska-Anchorage, Azusa Pacific, Central Washington, Dixie State, Northwest Nazarene, Point Loma and Western Washington). Six of those teams were in the final NCAA Division II West Region top-10 rankings at the end of 2013, which means the tournament will likely give each squad an early taste of the playoffs.

Five to six matches will be played each day at CBU, starting as early as 9 a.m. with the final match scheduled as late as 8:30 p.m.

Less than a week later, CBU women’s volleyball will take a pause during its conference match with Fresno Pacific on Sept. 19 at 7 p.m. to receive and celebrate its second PacWest Commissioner’s Cup in three years.

The Lancers won the Commissioner’s Cup, which is given to the most dominant program in the conference based on average finish in conference-sponsored sports, after winning three PacWest Conference Championships (men’s cross country, men’s basketball and softball) in 2013-14. CBU locked up top-three finishes in all seven other of its cup-eligible sports last year.

Summer time usually gives the California Baptist University Athletic Department a break from the hustle and bustle during the academic year, but a drastic increase in camp attendance kept campus busy this summer.

Approximately 2,000 youngsters attended CBU Athletic camps in 2013-14, which more than doubled the Lancers previous high of nearly 800 campers from 2012-13. Thirty different camps/clinics were hosted by 12 different programs at CBU this past year. 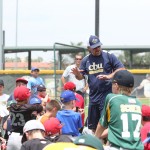 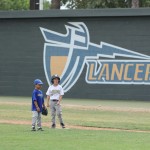 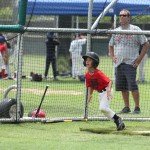 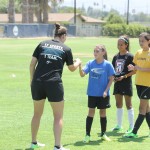 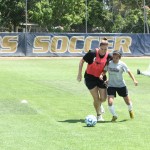 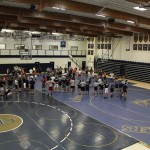 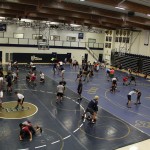 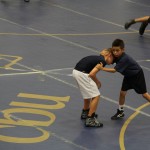 With year one of full NCAA membership in the books, California Baptist University Athletics is all set for the next chapter in Division II with the start of the 2014 fall seasons.

Six of the eight teams kicking off in the fall will look to qualify for the NCAA postseason for the second year in a row, with the two others aiming at their first Division II playoff berth.

CBU cross country takes off at the Lancer Invitational, which will be hosted at Rancho Jurupa Park in Riverside Saturday starting at 9 a.m. Both the men and women made the playoffs in 2013, with the women finishing top-three in the conference for the third year in a row and ninth in the Division II West Region, and the men taking fifth in the West and 22nd in the division.

The Lancer men have 11 returners, including All-American Bryton Reim and fellow all-conference runners Tyler Dutchover and Taylor Guske, and eight newcomers on board to aid in their quest for a fourth-straight PacWest Championship. There is balance for the CBU women, as well, with 12 returners and nine new faces. A trio of all-conference selections from 2013 – Natalie Ball, Kim Rabenstein and Jessica Malagon – boost the squad for the new trek. Fresh off a sixth-place performance in the West and a top-10 individual finisher in Division II, CBU women’s golf makes the quickest transition from offseason to in season for the Lancers. It opens the season at the Point Loma Fall Preview (Sept. 15-16) and will host its own tournament at the Victoria Club in the winter (Feb. 23-24).

The Lancers return Tina Yang, who took 10th at the NCAA Championships last year, the reigning PacWest Player and Freshman of the Year Marvi Monsalve and welcome junior University of Missouri-St. Louis transfer Tayler Hoag, who has won two collegiate tournaments and competed in the NCAA playoffs the last two years. Natalie Park and Nicollette Gino also bring playoff experience to the table. The team will look to claim its first PacWest crown after finishing runner-up in 2013-14.

Men’s golf is in a different situation, but shooting for the same goals as their female counterparts. Backed by a class of four highly-touted recruits and all-conference returner Tai Kuida, the Lancers are looking to build on a fifth and top-20 finish in the conference and the region, respectively. They open at the Western New Mexico Fall Intercollegiate tournament on Sept. 29-30 and host the CBU Invitational at the Eagle Glen Golf Club in Corona March 23-24.

Women’s soccer opens its season at home on Thursday in a non-conference clash with Cal State Stanislaus. The team will be looking to make the next move after a 12-5-1 record, taking second in the PacWest with a 10-2 conference mark and appearing in the NCAA Division II playoffs for the first time.

Despite graduating a strong group of seniors, the Lancers return the 2013 PacWest Defender of the Year, Silvia Sanchez, who was picked to repeat in the conference preseason awards, and the 2014 PacWest Preseason Player of the Year Kimberly Allard – a first-team all-conference forward last year. All-PacWest honorees from 2013 Rachel Witz (midfielder), Lindsay Vesling (forward) and Ashley Richardson (defender) are also back, forming a well-rounded group. After qualifying for the playoffs in 2013, men’s soccer is in a similar situation as its counterpart. The squad took third in the PacWest last year and is aiming at building on its success this year after graduating several key players. The Lancers will look to build on their 10-6-1, 9-3 in PacWest record.

CBU does return a core of key players fresh off all-conference honors. Midfielders Paul Oliver and Chris Gaitan were a 2014 All-PacWest Preseason selection and 2013 all-conference awardee, respectively. Paul Oliver and Rob White are back on the Lancers back line after being honored by the PacWest in 2013, as well.

A new-look CBU women’s volleyball team is building chemistry in preparation for the new year, with nine recruits and six returners making up this year’s roster. The group brings in plenty of size, with six players listed at 6-foot or taller. The Lancers open on the road with four matches at the Route 92 Tournament Friday and Saturday in Belmont before returning home for a big event of their own – the GNAC-PacWest Crossover running all day in the Van Dyne Gym from Sept. 11th to the 13th.

Coming off a 17-11 season in 2013, CBU is looking to build on its third-place finish in the PacWest, on a 14-6 record, and qualify for its first NCAA playoff tournament. In order to do so, CBU will have to slug it out in the stacked 13-team conference that includes 2013 Division II runner-up BYU-Hawaii. There is extra incentive for CBU men’s water polo in 2014. The squad will be playing under 16-year coach Rick Rowland for the last time, as he will be shifting his sole focus to Lancers swim/dive in 2015-16. After Thursday’s Blue and White Scrimmage, the team opens the regular season at the Triton Tournament against UCLA and UC Davis Saturday and 12:30 p.m. and 4:30 p.m., respectively.

The Lancers graduated their top-two scorers from last season and will likely showcase their defense in 2014 with Moorman in the cage. The 6-foot-3, 200-pounder is the team’s lone All-Western Water Polo Association returner, as he was named to the conference’s second and all-freshman teams.

A lot was accomplished by California Baptist University Athletics in 2013-14, our first season as a fully-fledged NCAA member. However, there is no such thing as satisfaction in athletics when a new season is waiting right around the corner.

The new season officially kicks off on Thursday when men’s soccer hosts the University of La Verne at 1 p.m., giving us another opportunity to leave a mark on the NCAA and build on our inaugural campaign.

We set the bar high for ourselves last season. Twelve of our teams qualified for the NCAA playoffs, we won four conference championships, our second PacWest Commissioner’s Cup and took 26th out of 311 Division II institutions in the Learfield Sports Directors’ Cup Standings.

Like it has always been at CBU, success was measured by more than just athletics last year. A total of 190 of our athletes received academic all-conference honors, our student athletes are graduating at an 80% rate and the 2013-14 graduating class graduated with a 3.2 cumulative grade-point average.

While we accomplished great things together, we know it is only the beginning. We are proud of what our department has accomplished so far, but we are not content. There are a lot of exciting things on the horizon and plenty to watch for this upcoming year.

Men’s cross country is looking to win its fourth PacWest Championship in a row, while men’s basketball, women’s swimming/diving and softball aim at repeating as conference champs this season. Legendary aquatics coach Rick Rowland is four wins away from his 500th with CBU, as he completes his 16th and final season as the Lancers men’s water polo and swimming/diving coach before focusing on swim/dive in 2015-16. CBU cheer is aiming to complete its third straight undefeated season and to claim its third consecutive National Cheerleaders Association Championship.

Of course, it is impossible to predict what highlights await us this year. We will just have to wait and see.