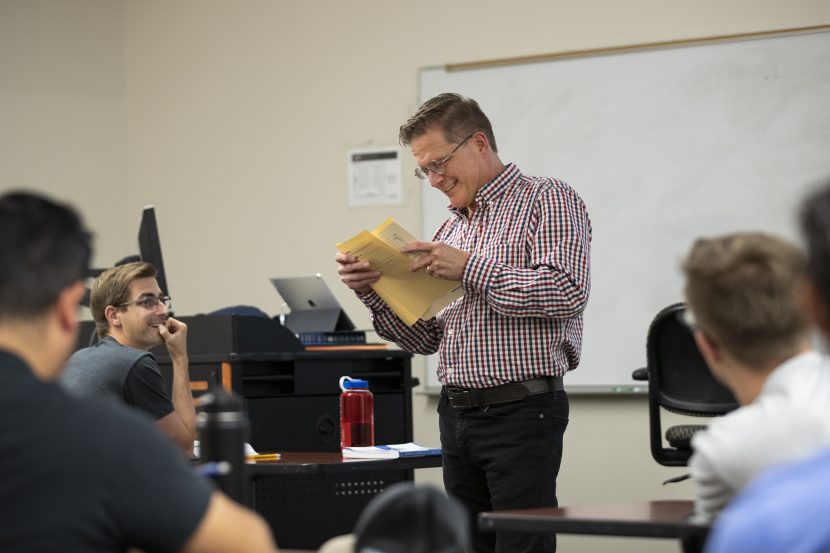 The School of Christian Ministries is blessed to have dedicated and passionate faculty members who love Jesus and desire to help others love Him more. This regular feature will help you get to know our faculty members more.

Education: Dr. Wilson earned a Ph.D. in New Testament and a Masters in Divinity from Southwestern Baptist Theological Seminary. He earned a Bachelor of Arts from Union University where he studied Religion and Greek.

Q. What do you enjoy most about teaching at CBU?

I love the opportunity to interact with a wide diversity of students.  In a given semester, I have the opportunity to interact with students taking courses for general education, for a particular major, and/or just for interest sake.  I really enjoy teaching students who are getting a first introduction to the Bible and Christian faith in a Bible survey class and sometimes help to change their biases against the Bible and Christianity and Christians.  Sometimes it is helping return a student to his/her Christian roots and find a new relevance for faith.  I enjoy helping students find tools that will help them read and study the Bible for themselves and learn how to use those tools to interpret the Bible.  I love helping students who are focused toward ministry preparation create patterns and habits of study that will shape how they do the work of ministry.  I love when students stop in the office and I get the opportunity to know them beyond a classroom interaction and to speak into their lives, that is, to do the work of discipleship.

Q. Why did you choose to focus your academic study on the New Testament?

First, I love the Bible.  I guess I focused on the New Testament because I had the opportunity to study Biblical Greek for several years before I even had the opportunity to learn Biblical Hebrew.  I remember, when I was in college studying Greek thinking – being nurtured in by my professors, I would love to be able to help nurture like this a passion for the study of the Scriptures in young students.  My focus in my preparation was primarily in New Testament Studies, but I continued to study Old Testament and still Old Testament Survey consistently.  I really enjoy seeing how intertwined the two Testaments are.

Q. What is your favorite thing to do in your free time?

I love just hanging out with my wife. We often sit on the patio with books in hand, reading and being.  I enjoy walking, especially with the wife and the dog-child.

Q. Your bio states that you are an amateur artist. What is your favorite artistic style and why?

It has been a long time since I’ve been able to focus in this direction.  I have always been a doodler; I listen better with a pen/pencil in hand.  When I was a full-time youth pastor, my wife recognized my interest and gave me art lessons for Christmas one year.  During the next year or so, I spent a couple of hours on Tuesday evenings at the art study and found it to be a healthy way to allow the stresses of ministry to melt away.  I began with charcoal, but spent most of that class-time trying to learn pastels.  I love watercolor as a medium, but have had little success at learning how to use watercolor; that’s my next step, I guess. 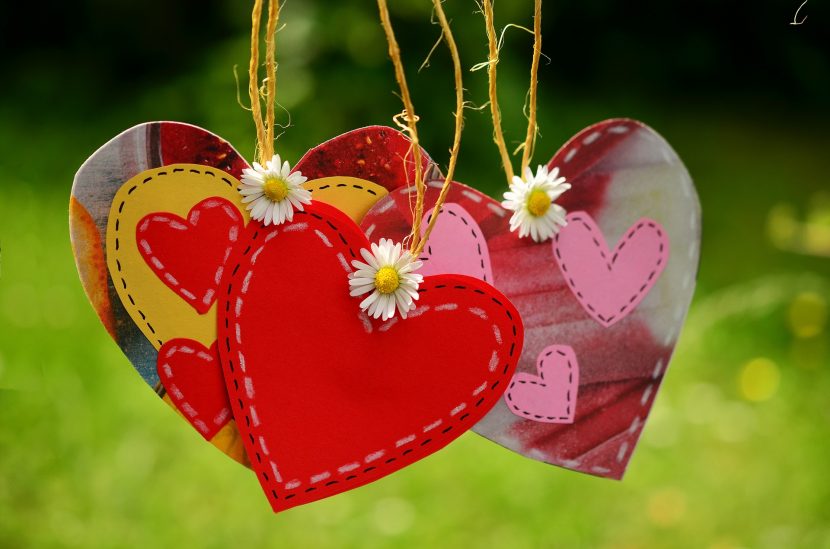 Let It Be Known To Everyone

Philippians 4:4 (“Rejoice in the Lord always”) and Philippians 4:6 “Be anxious for nothing.”) are common refrains in Christian circles. Less common is to hear the recitation of the verse sandwiched between – Philippians 4:5 which states, “Let your gentle spirit be known to all men” (NASB). This terse statement of Paul’s typically gets overshadowed by the familiar words that precede and follow it. However, just like the surrounding verses, Philippians 4:5 contains an important command for Christians to understand. One reason the verse gets overlooked is because we are uncertain about what it means for us on a practical level. We understand how to rejoice, and we can embrace the commandment not to be anxious, but what does it mean to let one’s gentle spirit be known to all men?

Recently, I dug into this question as I reviewed this text in preparation for a sermon. I compared English translations of the noun which is translated “gentle spirit” in the NASB. What I found was surprising. I looked at 11 translations and found the word translated 7 different ways! The older translations use words that suggest a sense of controlled behavior in interactions with others—words like “moderation” (KJV) and “forbearance” (RSV).  These suggest the idea of holding back or restraining oneself in terms of emotions, demeanor, and/or behavior. In the ESV, the word is “reasonableness” that should be known to all men. This suggests something similar to self-restraint, but more in the sense of one’s thinking and how that reasoning might be reflected in one’s interactions with others.

The other translations of the noun are more explicitly related to how one interacts with others, specifically a positive, favorable interaction—“graciousness” (CSB), “considerate” (Phillips, NLT), and most frequently “gentleness” (NIV, NKJV, NRSV) or “gentle spirit” (NASB).  The Message pulls these favorable ideas together to speak of an attitude of care that should characterize a Christian in his/her interactions with others: “Make it as clear as you can to all you meet that you’re on their side, working with them and not against them.”

I see nothing amiss in any of these translations.  None of them distort the meaning of the text. They all contribute to a fuller conception of what Paul has in mind and, of course, to the complexity of meaning that can be found within a word in any language.

However, as we discuss in our biblical interpretation classes, it is easy for a student of the Bible to see what seems like a disparity of meaning for a single word and do nothing more than select the one that feels the best at the moment. Additionally, a preacher may be inclined to select the translation that fits best with the point he is trying to make in his teaching or preaching. The prudent teacher or Bible student consults resources that can help him understand the Greek behind the English translations, but in this case one would find the same disparity in the original Greek word (epieikes) that we find among the English translations.  As we reflect on this further, we would do well to consider what these various translations of the word have in common, that is, to explore the range of meaning represented in the translations (this is what theologians call the “semantic range”).

Looking at the various English translations gives us a hint of the semantic range that we also find in the Greek. A proper understanding of the term translated “gentle spirit” can range from self-control and deference on one side of the spectrum to an attitude of concern and consideration on the other side. On one end of the spectrum, we see where epieikes is considered as requiring a holding-back or giving-up or a display of self-control to the one who is exhibiting epieikes. At the other end of the spectrum is the one who benefits from the epieikes, when it is demonstrated by another – this is seen as consideration and care. Thus the older English translations emphasized the required behavior for the one who is displaying the “gentle spirit” (moderation (KJV) and forbearance (RSV)), while many of the more recent translations focus on how this spirit is experienced by others—reasonableness (ESV), graciousness (CSB), considerate (Phillips, NLT), and gentle spirit (NASB). The range reflects how one both practices the required behavior (by restraining their behavior for the cause of Christ), and how another experiences it (by witnessing the gentle spirit of the one who is a Christ follower).

As I sort these ideas that I find in the English translations, I am reminded about what Paul has already expressed explicitly in Philippians 2:3-4,

“Do nothing out of selfish ambition or conceit, but in humility consider others as more important than yourselves.  Everyone should look out not only for his own interests, but also for the interest of others.”

It is the same humility that Paul writes about in Philippians 2:3-4 that he exhorts should be exhibited to everyone in Philippians 4:5. The Greek word he uses in Phil. 4:5 is the same word he uses in 2 Corinthians 10:1, where speaks of the gentleness and meekness (epieikes) of Christ.  This parallels the picture of Jesus used to model humility in Philippians 2:5-11. Christ’s condescension to this Earth and His death on the Cross are the ultimate self-giving and self-emptying and are expressive of the ideas packed into epieikes.  As Herbert Preisker has stated, “As the heavenly King, He is gentle as only one who has full power can be.”[1]

In other words, in Philippians 4:5 Paul uses the imperatival (commanding) construction of epieikes simply to say in a different way what he has already said clearly in Philippians 2.  Gentleness, considerateness, and graciousness indeed flow out of humility; they are “put-others-first” concepts that are reflected in “put-others-first” attitudes and behaviors.  These attitudes and behaviors should be characteristic of the one who follows Christ. Even the control-oriented ideas of “moderation” and “forbearance” are not suggesting self-control for the sake of self-control, but the giving-up of “selfish ambition or conceit” (2:3) and looking beyond one’s own interests to consider others and their interests (2:4). In other words, Paul is continuing to point the readers to displaying Christ-like behavior – by rejoicing always (Phil. 4:4), by being anxious for nothing (Phil. 4:6), and by displaying the same type of humility and gentle spirit as our Savior, who emptied Himself for the sake of others, even to the point of death on a cross (Phil. 4:5, 2:8).

While Bible students may feel frustrated by the struggle to understand and explain such ideas, they need not be. Any of the English translations I have mentioned can provide at least a starting place in this discovery. When you see, as I did, such variation in translation, explore the breadth of meaning, search for what is shared among the various translations, and consider how to capture the thread that ties them together. The variety is not because of bad translators among us but because biblical words (Hebrew and Greek) are fuller and richer words than can be translated with a single English word. We recognize that as English speakers we are blessed to have such a wealth of translations to inform our understanding of the Bible, and they all help us discover the deep riches of biblical truth. Additionally, as it applies to this passage in particular, we recognize that the beauty of the word chosen by Paul helps us to further understand the need to have the same attitude as Christ—that as we rejoice in Him (Phil. 4:4) and we choose to trust in Him rather than worry (Phil. 4:6), we should also display His attitude of service and humility to a world that needs Him.