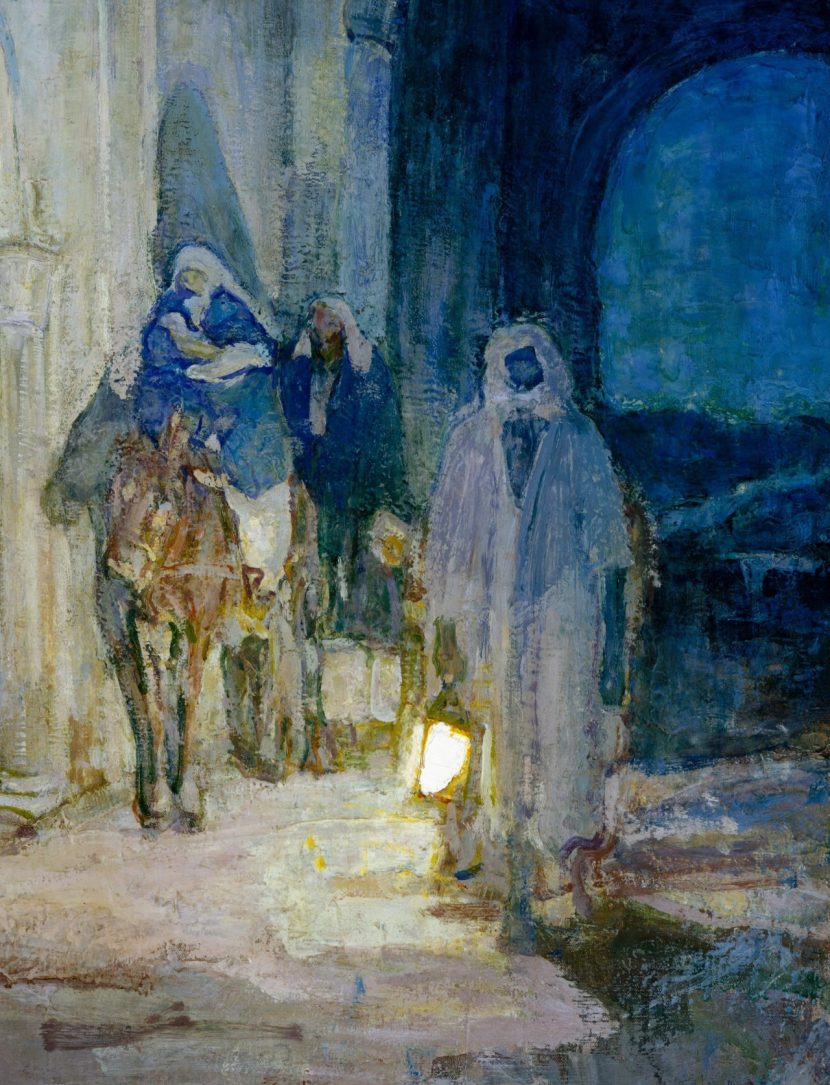 The Flight into Egypt by Henry Ossawa Tanner

Postscript for Christmastide: “The Flight of the Holy Family into Egypt”

This post reflects Dr. Mobley’s personal interest in the dramatic nature of the Gospels (with a love for mystery!) and a persistent emphasis on seeing vital connections between the biblical story and contemporary life, an interplay that Dr.  Mobley strives to help his students see when they are in his classes.

Christmas can be crowded.  Perhaps rightly so, if appropriately centered, for there is much to celebrate—the Advent of a Saviour, Lamb of God, Prince of Peace.

But frequently overlooked in the busyness of the “holiday season” are the traditional ‘Twelve Days of Christmas’—an “inter-land” of time suspended between two mysteries: the mystery of Christ’s Incarnation and the mystery of a yet untraveled New Year.  Reflecting on the first of those mysteries can help prepare the way into the latter.

More particularly, those ‘Twelve Days’—from Dec. 26th to Jan. 6th—culminate in the visit of the magi, commemorated in the church calendar as the Feast of Epiphany (which means appearing; manifestation).  It is reasonable to infer that the “wise men” were late-comers to the occurrence of Jesus’ birth.  Consider the text: 1) the magi enter “the house”—better accommodations than an animal stable; 2) Jesus is referred to as “the child” (paidion) rather than “the infant” (brephos, as in Luke’s account); and 3) the murderous two-year calculation of King Herod, derived from information about the sighting of the star, provided by the magi who serve as unwitting accomplices to Herod’s treacherous scheming.

Each of the Gospels presents high drama, and uniquely in Matthew’s Infancy Narrative there is intense suspense.1 If presented theatrically:  Act I—the dream-warning to Joseph; Act II—the worshipful visit of the magi; Act III: downstage—the escape into Egypt, while upstage—the tragic Massacre of the Innocents; then an Epilogue—the return to Nazareth.

From the storyline of ‘The Flight into Egypt’ what lessons—“take-aways” as we commonly call them—might be drawn from this intriguing gospel story? We will examine five aspects of their journey, and consider how they apply to our own lives today.

1. A pervasive atmosphere of threat

There is ample reason for the Christmas angels’ inevitable opener:  “Fear not!”  The Infancy Narrative, whether as given by Luke or supplemented by Matthew, is threaded with sufficient cause for anxiety: an unwed young maid facing disgrace, her perplexed fiancée seeking to deal with shame in an honorable manner, and the obligation of a strenuous journey which complicates an already precarious personal crisis.

Jesus’ earthly life was bracketed by the maneuvering of two power-players—Herod, the paranoid king, and Pontius Pilate, the vacillating governor—both fearful of losing their grip on privileged positions of authority.

“Why do the nations rage … and the rulers conspire against the Lord and his Anointed One?” asks the Psalmist (2:1-2).  Well, they always have and always will.  It is their modus operandi … that is, until the return of the Lamb of God/Lion of Judah and his establishment of God’s justice and eternal reign of peace.

The primary mark of character shared by Joseph, Mary, and the magi is their response of faithful obedience to God’s revealed direction for their lives, no matter what the cost and in spite of yet unanswered questions.

Jesus entered his earthly life as the immigrant par excellence, in a family of refugees seeking asylum.  Matthew notes this, in his typical spotting of fulfilment-texts: “Out of Egypt I called my son.” (Hosea 11.1)  And the adult Jesus said, “the Son of Man has nowhere to lay his head.”

Strange and seemingly inappropriate were those presents that the magi offered.  (If Jesus actually was born in December, a Hanukkah toy might have been more welcome for a young Jewish child!)  Yes, those extravagant gifts have often been seen as symbolic of the various facets of Jesus’ person and mission (King, Priest, Prophet).  But God who is lavish in his giving is also mindful of the practicalities of life.  How was this immigrant family going to survive, until Joseph found carpentry openings in the job market?  Would he be able to link up with Jews of the Diaspora, perhaps in Alexandria?

The story of the ‘Flight to Egypt’ is an interplay of divine revelation of purpose, and human trust in God’s faithfulness to provide.  The characters in each of the “acts” in this gospel drama intertwine with one another, as they each respond in individual ways to the God of Israel, the Lord of history.

Drama, paradox, mystery, divine providence and exemplars of trusting obedience … they are all there in Matthew’s account of the “Flight into Egypt”.  Before the “Bethlehem starlight” recedes too far from us and becomes dimmed by the “tyranny of the urgent,” may we allow enough sacred space to reflect upon and rejoice in the coming of the One who is, in deepest truth, Immanuel, “God with us!”  This is the Word of the Lord … thanks be to God!

The Impressionist depiction by Tanner, featured at the beginning of this post, evokes an air of suspense surrounding the arrival of the Holy Family in Egypt.  See a discussion of the life and work of Henry Ossawa Tannner (an African-American artist of the early twentieth century) in: Podles, Mary Elizabeth.  “The Flight into Egypt.”  Touchstone: a Journal of Mere Christianity  (November/December 2019): 54-55.

Comments Off on Postscript for Christmastide: “The Flight of the Holy Family into Egypt”